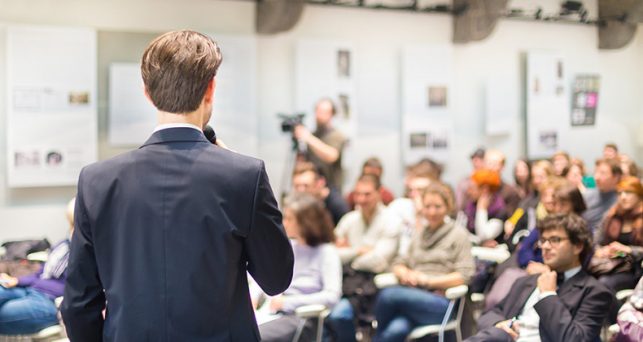 Every speaker needs to be credible. If your audience spends the duration of your talk mulling over whether or not to take you seriously, you can kiss goodbye to any chance of your message resonating. Sometimes your credibility has as much to do with your behavior as it does with the message itself. Here are a few common bad habits to watch out for.

Speakers are frequently coached to smile, but many overdo it. Rather than smiling continuously, just smile spontaneously–as a natural reaction to a certain part of your message or based on audience feedback. You can’t have a smile pasted onto your face continuously, which makes you look wooden, like a Barbie or Ken doll. Oversmiling comes across as fake, definitely costing you credibility points.

Every speaker needs to show a level of ease in their delivery. Talking fast, gesturing quickly, any jerky movements–these behaviors project anxiety rather than enthusiasm. They make your energy seem too sharp, like a jackhammer. You might be worried about punching things up a bit to avoid putting your listeners to sleep, but it’s possible to go overboard. With too much energy, you’ll come across as talking at your audience instead of to your audience.

Whenever you wink, you’re sending a “Get it?” message. It invites your audience to hunt for some sort of unspoken meaning, which introduces ambiguity you probably don’t want. You might think that winking once or twice at a key moment helps makes you seem clever or intriguing, like some kind of impresario, but in most professional settings it costs you credibility points by suggesting that you’re not being clear or transparent.

Don’t pace continuously back and forth. If you keep moving while you speak you’ll drive your audience to distraction. They’ll start to focus less on what you’re saying than on watching you move. One principle I learned as a theater director was to avoid having actors walking and talking at the same time, unless they’re saying throwaway lines. As a speaker, you don’t necessarily need to stay perfectly still, but pacing too much suggests that everything you’re saying is essentially a throwaway line. Listeners will miss your key points and begin to doubt your credibility.

You already know not to fidget, but it’s sometimes hard to avoid making small adjustments when you speak–especially when you’re nervous. Fiddling with your hair, your jewelry, or your clothes may help you feel more comfortable, but they make you look uncomfortable, and the audience wonders why you’re so jittery. They’ll see a disconnect between what you’re saying and what you’re showing them–they feel the anxiety you’re feeling.

While being too energetic can be a credibility killer, not being energetic enough can do much the same. Reining it in and appearing too stoic can leave you to come across as mechanical–or worse, you seem like you’re hiding something. You might think you need to project an air of seriousness in order to be taken seriously. But if you go too far, you’ll end up looking like an android instead.

While recent research has focused on so-called “upspeak”–ending sentences on a higher pitch–as a problem for women (some of whom argue, by the way, that the bias against this habit is itself sexist), I’ve found that the real credibility killer is too much pitch variability overall, a problem that’s actually gender-blind.

As a speaker, your pitch should stay level or go down very slightly as you finish your sentences. It’s true, as upspeak critics have noted, that if your pitch rises at the ends of sentences, everything winds up sounding like a question. That can sap some of the conviction from your voice. From your listeners’ standpoint, too much variation in your speaking pitch is like a roller-coaster ride–a distracting experience rather than a compelling one.

Your credibility as speaker always hinges on what you’re saying, but it also has a lot to do with how you say it. When you’re nervous, these common bad habits are easy to miss, but paying a little more attention to how you look and sound can help you come across as someone really worth listening to.

Anett Grant is the CEO of Executive Speaking, Inc. and the author of the new e-book, CEO Speaking: The 6-Minute Guide. Since 1979, Executive Speaking has pioneered breakthrough approaches to helping leaders from all over the world–including leaders from 61 of the Fortune 100 companies–develop leadership presence, communicate complexity, and speak with precision and power.