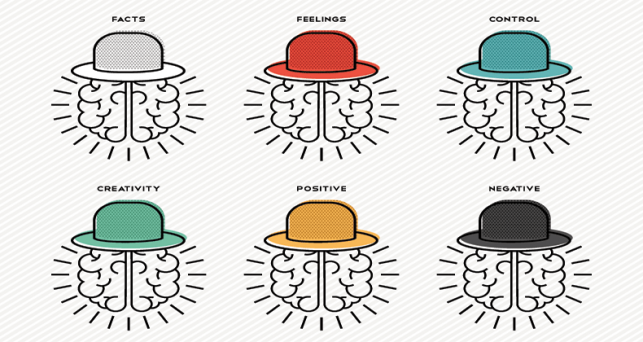 Four decades ago, renowned business consultant Edward de Bono came up with a concept called “six thinking hats” to help people make decisions. In the 1970s, before good ideas were a dime a dozen, there was time to learn and implement such concepts in a business and watch that labour yield fruits.

Today, decision-making is a complex process. Research tells us that the average business deal or decision now involves 5.4 stakeholders. And when it comes to decisions about marketing – or brand – or anything go-to-market related, this cocktail of caution, creativity, calculation and credit-taking renders businesses almost powerless.

What suffers as a result is the introduction of new ideas. We see less of the bold risk-taking that wins big battles, the vision that sees the bigger picture – and the constructive collaboration that enables a business to be agile. But if agility is as sought after as it’s said to be these days, it’s well worth reinvesting time into the six thinking hats and what they mean for business decision-making, particularly in marketing.

De Bono’s basic premise is that thinking is the ultimate human resource. But too often, decision-making meetings turn into arguments where each individual represents their own agenda and viewpoint with little consideration or time for anything else.

This individualistic approach ultimately leads to thinking that’s distinctly ‘inside the box’. People who come forward with great ideas can’t find backing for them, as no one else will stick their necks out. Or else, they can’t find validation because nay-saying is the easiest thing to do after sticking to what’s already been tried and tested.

That’s why the subconscious handles 85 per cent of our decisions, resulting in repetitive decision-making patterns. It’s also why strong brands outperform weak brands by 20 per cent.

To re-prioritise thinking – the ultimate human resource – we need a framework that allows group thinking to flourish and yield the kinds of decisions and buy-in that help move the commercial needle. This is more important than ever in today’s opportunity-riddled business landscape. So, here’s how to use De Bono’s six thinking hats in your business or team.

But first, some rules…

1) The whole group usually has to wear the same colour hat at the same time – it’s not one hat per person.

2) The goal is constructive decision-making, so everyone needs to agree to wear each hat and to play by the rules.

This hat allows the group to set up a process to control the meeting, deciding on objectives, structuring the conversation and summarising outcomes and ‘next steps’. It’s the ‘process management’ element of the decision-making agenda. One facilitator will often keep this hat on throughout the meeting. They’ll remind everyone to focus, ask the group to switch to the next hat and generally lead the meeting.

Blue hat thinking is necessary to start off and conclude meetings. It ensures the group is thinking clearly, sticking to objectives and progressing toward the right outcome – a collective decision.

When your team wears the white hat, it is focused on taking an external, objective perspective. This requires collecting and analysing the data available about the problem you face to identify gaps and opportunities. This is where you will want to focus on metrics like reach, leads and sales, which you can discover more about here.

Don the white hat in the evaluation and planning phase of a project, campaign or strategy. It allows you to focus on data insights and make decisions based on the bigger picture.

When the group needs to spot opportunities and possibilities or see the value in an idea, put on the yellow hat. That means putting criticism to one side, avoiding words like ‘no’, ‘but’ or ‘however’ and instead framing each response with ‘what if…?’ questions.

This will drive the group’s ideas forward and help you develop them into something stronger and more mature. Good ideas need a supportive environment in order to grow, and the yellow hat is great for openness and collaboration.

Taking a yellow approach is best for welding a new team together, instilling a supportive group culture and building trust between stakeholders.

This is the hat of caution, useful for spotting inconsistencies and weaknesses. It’s the hat most of us put on without even knowing it when evaluating information presented to us. If you’re not careful, it can be disruptive in brainstorms and stop the flow of ideas.

That said, when used at the right time black hat thinking lets you run risk assessments and is therefore crucial to every marketing or business initiative. Any major shift in strategy, new campaign or communications initiative should be preceded by an audit of existing practices. Look at what’s working and what isn’t and weigh the benefits and risks of the new approach. Structuring the assessment and adding in relevant data points will ensure it’s constructive rather than limiting.

The black hat is for being the voice of reason before key launches. It makes sure campaigns and practices are compliant, considers brand safety when buying ad space and makes sure your message planning lines up with the brand.

The red hat is concerned with intuition and emotion. Stakeholders wearing the red hat can take an emotional view, prioritising ‘gut instincts’ or how they feel about a particular avenue or decision or idea.

Red hat thinking also helps to uncover why certain individuals feel strongly one way or another. Do they have something personally at stake? Are they pushing an idea because it was theirs in the first place? It also allows you to make room for values in the decision making process. Given that people buy people first, it’s often essential to be able to revisit the beliefs behind important decisions.

Whenever you need to secure buy-in for an idea or initiative, it’s red hat time. This will help you understand what’s motivating different stakeholders and craft emotionally powerful arguments.

Green hat thinking is about bringing new ideas to the table. The wilder, the better. De Bono says the green hat is mostly about ‘lateral thinking’ – exploring possibilities rather than going for the same old ideas or tactics.

This attitude encourages the group to propose alternative ideas and even revisit things an organisation has previously dismissed. (Proposing in a marketing meeting at a digital-first company that they consider spending £100,000 on a fully print-based campaign, for example.) The purpose here is to explore what ‘movement’ such an idea can generate – what traction and positive results.

Put the green hat on when new ideas are needed, whether it’s to brainstorm for a new campaign or to turn a negative situation into a fresh opportunity during a crisis.

Depending on the problem or challenge you are trying to solve, you may want to divide into smaller groups or work individually to take down notes during each ‘hat thinking session’.

One session should last about two minutes, though this can be adapted to fit the topic at hand. As it progresses, briefly discuss or note down your preferred solution for each hat you wear.

The ‘six thinking hats’ technique is primarily a group decision-making tool, designed to structure meetings and brainstorms to be as effective as possible. Sequences should start and finish with the blue hat, initially for the group to decide which hats to use and then to reach a joint decision.

As de Bono points out, “the biggest enemy of thinking is complexity” – and you’d be hard-pressed to find a meeting now where the person proposing the idea isn’t determined to fight it through, while everyone else’s aims to be cynical without having to take the fall. This leads to over-reliance on old ideas rather than big ones – and organisations that are lacking in innovation.

The key to agile thinking is reducing conflict while maximising productivity and collaboration. Groups must avoid getting bogged down in politics, with everyone assuming the same role they always take and recycling tired ideas. Great businesses focus on big things – and surely the luxury of having more ways to think about a problem will always lead to a more robust solution.

‘Six thinking hats’ meetings will mean you can generate a 360-degree view of an issue or opportunity and reach cohesive decisions that everyone buys into and is confident in.

By Freddie Ossberg | Founder of Raconteur