Secrets Of The Most Productive People: 2016 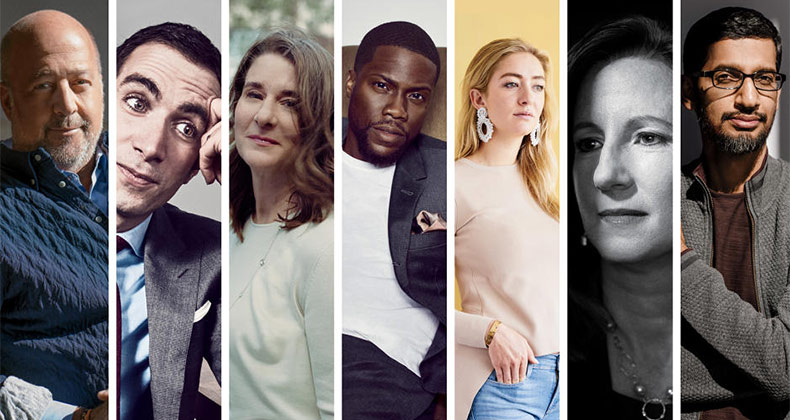 Secrets Of The Most Productive People: 2016

Time he wakes up: Between 4:30 and 5:30 a.m.
First thing he does in the morning: «Get up, go to the gym. I’m probably in there for an hour to an hour and a half.»
Productivity tool: «Kevmoji. Kevmoji puts a constant smile on my face and helps me take text messaging to the next level.»
Most productive space: «I go onstage to figure things out. I’ll have a premise, a couple of beats, and I’ll go onstage and talk about the thoughts. That’s how I write.»
Time he goes to bed: «Depends on the day. Tonight, probably 11:30 or midnight.» —As told to Benjamin Svetkey

Time she wakes up: «6:30. My morning starts with a little bit of yoga and meditation. And then right after that, I get the kids up.»
What she does while commuting: «I have been listening to the Hamiltonsound-track pretty much nonstop.»
Email strategy: «I split my personal and my office emails into two different folders, and I’m very disciplined about only going into business ones at certain times of the day.»
Last thing she does at night: «I think of one thing I’m grateful for. It’s a nice way to settle your mind before you go to sleep.»
Time she goes to bed: Between 9:30 and 10 p.m. —As told to Missy Schwartz

Time he wakes up: «Around 7 a.m. But I have a problem with sleeping when I travel. I just came back from Japan and I think [I slept] five hours in five days. At a certain point, I collapse.»
Mantra: « ‘No’ is not attractive. If someone has a new idea, I expect people to be open-minded.»
Worst habit: «I’m impatient. When my leg starts moving up and down, that is a signal that people need to speed up or change subjects. It’s kind of a joke at the company at this point: ‘Don’t move the leg, please don’t move the leg.’ »
Most productive time: «When I run. My mind is free. I try to run for an hour three or four times a week.»
Time he goes to bed: «Around midnight.» —As told to J.J. McCorvey

Time she wakes up: 5 a.m., to spend time alone before her kids wake up.
What she lets slide: «Right now, I don’t feel guilty that I’m not working out. I’ll feel guilty about it at another time.»
Worst habit: «Too much caffeine. I haven’t tried to curb it in any way.»
Most productive space: «Any place I can wear headphones. [The music] has to be something I can sing to. Last year, it was just Aretha Franklin. The year before it was Marvin Gaye. This year it’s only Hamilton.»
Time she goes to bed: 10 p.m. —As told to J.J. McCorvey

Time he wakes up: «6:45 to 7:30, depending on how late I stayed up.»
First thing he does in the morning: «Check my email, brush my teeth. Sometimes at the same time.»
Most productive space: «Anywhere that’s quiet and has large windows.»
Lunch routine: «I actually have two lunches: the first one at around noon, and then a sandwich at around 3 p.m.»
Motivational object: «The first Chromebook we ever made. It reminds me of the journey we’ve been on to make computing accessible for everyone.»
Daily breaks: «If I’m at work, I’ll take a walk. If I’m at home, I try to sit down and have a chat with my kids—I always learn something new.»
What he lets slide: «Personal emails. Sorry, Brian, I promise I’ll respond soon.»
Best habit: «Listen first, and ask why. Also, I’ve been told that I’m a voracious reader.»
Worst habit: «Eating sugary things when I’m stressed.»
Time he goes to bed: «Later than I should.» —As told to Harry McCracken

Time he wakes up: 7 a.m. «I have a little prayer and spirituality moment for 90, 120 seconds in the morning.»
How he handles stress: A deep-breathing exercise he learned from his Pilates teacher.
Mantra: «Don’t be the best, be the only.»
Lunch routine: «The first thing my assistant asks me in the morning: ‘What do you want for lunch?’ I don’t like to waste meals. [What I eat is] the exact opposite of the sad desk lunch.»
Most productive space: «My son’s room when he’s asleep. Being in his room is a calming influence on me.»
Time he goes to bed: «Between 12:30 and 1 a.m.» —As told to Rob Brunner

Time she wakes up: 6 a.m.
Most productive space: «Outdoors. You can’t stay cooped up all day.»
Productivity tool: «Facebook Messenger. Everyone is supercomfortable with it because they’ve been using it personally. I don’t like to introduce things at work that [employees] don’t feel like they’d want to use in their personal life.»
Best habit: «Refreshing my email every 10 seconds is probably my worst and my best. While I don’t miss anything professionally, I might miss the stop-and-smell-the-roses moments.»
Nightly routine: «I’m trying to change it because currently it consists of some sort of red wine.»
Time she goes to bed: 10:30 or 11. —As told to Missy Schwartz

Time he wakes up: Between 3:55 and 4:25 a.m.
Productivity philosophy: «I don’t think anybody can be particularly successful or productive on their own.»
Email hack: «SaneBox does a pretty good job of prioritizing email and eliminating stuff that I don’t really need to look at.»
Go-to motivator: «On my desk at home, I have tacked [up] this quote: Aren’t you worried? And the next sentence says, would it help? It comes from the movie Bridge of Spies. If it wouldn’t help to worry about it, [I’m] not going to worry about it right now.»
Best habit: «I’ve never been a big drinker, but I don’t drink on weekdays. I don’t get as much sleep as I want anyway, so it [would be] just another thing slowing me down.»
Time he goes to bed: «9:30 or 10 p.m. Later if I’m being bad.» —As told to J.J. McCorvey

Time she wakes up: Between 6 and 7:30 a.m.
Worst habit: Late-night emailing.
Mantra: «Technology should help you do your job, not control your job.»
Nightly routine: «Watch Seinfeld or Friends on TV.»
Time she goes to bed: 11:30 p.m. —As told to Ruth Reader

Time she wakes up: 5 a.m., to visit her horse before work. «I don’t have enough time to ride, I just groom him. It’s very therapeutic.»
Email strategy: «I’m so ‘on’ at work that the moment I get home, I don’t check my email again. Everyone has my phone number if they need me.»
Audible assists: «For creative work, it’s James Taylor, Tom Petty, George Strait. For a repetitive task, it’s something more energetic, like ’80s pop, Beyoncé.»
Productivity philosophy: «Say ‘yes’ first, figure it out second.»
Nightly routine: «Whiskey on the rocks and TV.»
Time she goes to bed: 9:30 p.m. —As told to Elizabeth Segran