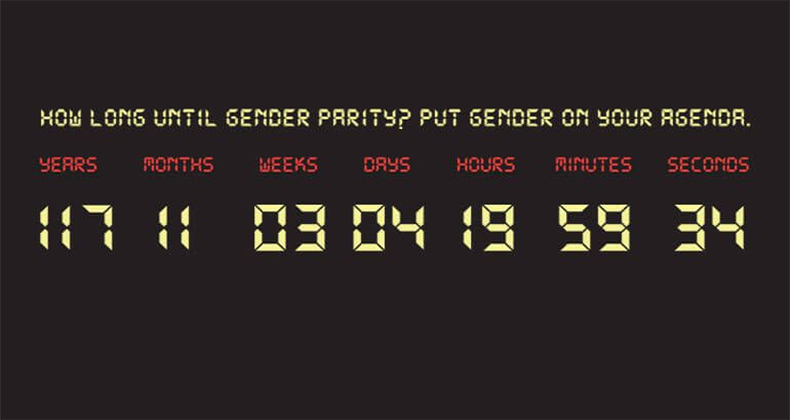 The latest World Economic Forum research shows a startling reverse in progress to achieve gender equality for women at work. Can we wait 118 years – more than the age of the oldest woman on earth – to achieve gender parity?

In 2014 the World Economic Forum released an unsettling report: based on current trends, it would be another 81 years before women achieved economic equality in the workplace. Like most people, I was very troubled by these findings. After all, four decades means four more generations of unequal paychecks and unequal boardrooms. It means my college-aged daughter – and the women of her generation – would spend their entire lives working at a disadvantage.

By Nov 2014 the news actually got worse – far worse. According to the Forum’s latest findings, that estimate is now 118 years. The oldest woman on earth isn’t even that old (Her name is Susannah Mushatt Jones; she’s 116, and her parents were share farmers). Based on this estimate, by the time women achieve workplace parity, in the year 2133, my great-granddaughter could well be a great-grandmother — and neither will have seen global gender parity.

A trillion dollars of wasted potential

Study after study confirms that empowering women in the workplace isn’t just the right thing to do – it’s the smart thing for business. In a recent EY study, for example, 64% of high-performing companies reported that men and women have equal influence on strategy in their organizations, compared with only 43% of the lower-performing companies. Many other well-known global organizations have issued studies showing similar outcomes – including increased profitability, ROI and innovation – when women are counted among senior leadership.

Enabling women also boosts the economy: one report estimates that closing the gender gap could raise U.S. GDP by 9% – that’s over a trillion dollars. Other countries would see similar spikes in growth.

At EY, we’re on our own journey to close the gender gap. Part of that means being honest with ourselves about where we’re making progress, where we’re still falling short and what we can do about it.

Half of the college graduates we hire are women, but our global board is only 28% women and only 19% of our partners are women. We are making a concerted effort to improve that – this year 31% of our new partners were women – but we know we have much more work to do, and we’re committed to doing it.

To that end, EY recently surveyed leaders from 400 companies around the world on the topic of gender inequality. We combined their insights with our experience to create three actionable steps for any company that wants to level the playing field: