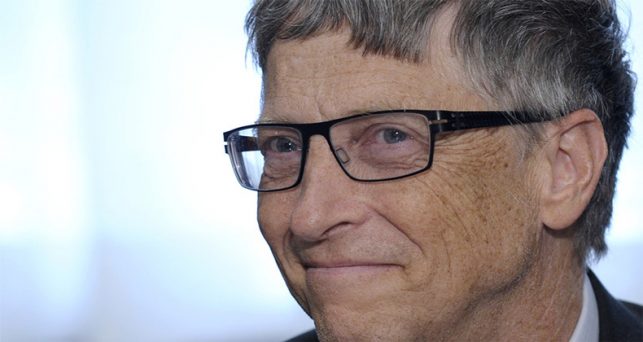 If you are Bill Gates, who spends his time immersed in global issues like poverty, infant and maternal health, and infectious diseases, your idea of a summer beach read is far from the norm of a frothy romantic comedy or thrilling-but-forgettable crime novel.

Instead, it’s much more a book that offers some kind of fresh perspective on issues–often depressing ones–relevant to our society today. Gates, writing about this year’s installment of his annual list of summer reads, acknowledges this. None of the five books he’s selected this summer “are what most people think of as a light read,” he writes on his blog, Gates Notes, when introducing his picks.

Every book except one, Gates says, “deals with the idea of disruption, but I don’t mean ‘disruption’ in the way tech people usually mean it.” Four of the books on the list grapple in some way with upheaval (which is, in fact, one of the titles of the books), whether that be war, crisis, or a call to reassess the economic system that’s governed much of our world for decades. For a change of pace, Gates also recommends a book that takes an in-depth look at the blood in our bodies (the only one of five by a women, slightly better than some years), but acknowledges it may not be for the squeamish.

Before getting into his five picks, Gates does offer up a more lighthearted read: The Rosie Result by the Australian writer Graeme Simsion, the third and final installment in a trilogy that centers on a socially awkward genetics professor attempting to maintain a relationship. And he also says he can’t resist a plug for Melinda Gates’S book The Moment of Lift, which centers on women’s empowerment and issues a call for gender equity. “I know I’m biased, but it’s one of the best books I’ve read so far this year,” Gates writes.

Upheaval: Turning Points for Nations in Crisis by Jared Diamond

As the title suggests, this latest work by the historian and Guns, Germs and Steel author concerns moments of crises. Diamond examines how individual people navigate crises, and extrapolates that framework onto a discussion of how nations like Chile, Finland, and Germany have managed challenges like civil war, malaise, or foreign threats. “I admit that at first I thought it might be a little strange to borrow from a model of a single person’s emotional turmoil to explain the evolution of entire societies,” Gates writes. “But it isn’t strange at all; it’s revealing.” (Gates picked this book before its veracity was questioned in a New York Timesbook review).

Nine Pints: A Journey Through the Money, Medicine, and Mysteries of Blood by Rose George

This is the book on Gates’s list that doesn’t–at least overtly–deal with disruption or crisis. But the concept for the book certainly originated with it: British nonfiction author Rose George has a condition called premenstrual dysphoric disorder, which causes extreme pain and mental distress before her period each month. Her experience with this disease catalyzed an interest in menstruation–and blood, more broadly–and how it’s treated and valued in cultures across the world. Some of the stories George reports on, like how girls in poor countries will have sex with older men just to be able to afford pads and tampons, Gates writes, “will make your blood boil.” But other parts of the book, he says, nod to how a better understanding of blood could lead to cures for diseases. “I think everyone wants to know at least a little more about this topic,” Gates writes. “After all, there is nothing that more people have in common than blood.”

A Gentleman in Moscow by Amor Towles

As Gates puts it, this novel is “a fun, clever, and surprisingly upbeat look at Russian history through the eyes of one man.” A Gentleman in Moscow dives into the period from the early 1920s, just as the Bolsheviks have taken power, through the 1950s. The one man through whose eyes we take in this history is Count Alexander Ilyich Rostov, who’s been sentenced to a life of house arrest in Moscow’s Metropol Hotel. The story is fictional, but the hotel is a real place, and we see both how the Count navigates its narrow confines, and how the building and its inhabitants respond to global events like World War II. “It gives you a sense of how political turmoil affects everyone, not just those directly involved with it,” Gates writes.

Presidents of War by Michael Beschloss

In each of the nine major conflicts the U.S. entered from the early days of the country through the 1970s–from the War of 1812 to the Vietnam War–the presidents in power at the time made critical decisions that steered the outcomes and impacted thousands of lives. Beschloss’s book, Gates writes, “didn’t unearth much new material about any of these wars,” but it does delve into the decision-making process around conflicts in a way that should be illuminating for leaders now. The book shows how the wars connect with each other, and makes it “hard to think about today’s conflicts without thinking about how they might connect to the past, and what impact they might have on the future,” Gates writes.

The Future of Capitalism: Facing the New Anxieties by Paul Collier

The economic system that governs most of the world has come under scrutiny in recent years, and Oxford economist Paul Collier is a significant voice in the critique. His latest work claims that capitalism is working for a select few, but leaving many others behind. “It’s a virtuous cycle for a lucky few and a vicious one for others,” Gates writes. Undoubtedly a member of the lucky few, Gates is also very invested in addressing disparities. “I was especially struck by the central idea of his book, that we need to strengthen the reciprocal obligations we have to each other,” he writes. He’s ready to act on that: In his blog about The Future of Capitalism, Gates includes an overt call for the U.S. to raise taxes on the wealthy to generate more funds to help those left behind. Hardly the idea you may expect to derive from typical summer read, but it’s welcome and arguably much more important.