8 Must-Download Apps For Your New iPhone Or Android 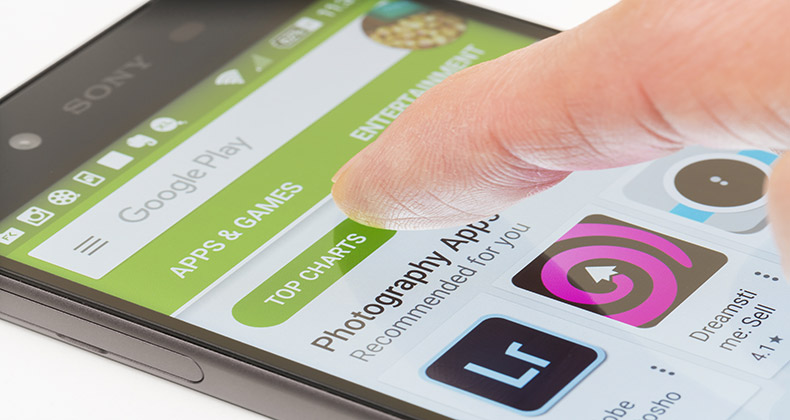 8 Must-Download Apps For Your New iPhone Or Android

If you just unwrapped a new smartphone or are thinking of using that envelope of holiday cash to run out and buy one and you’re eager to fill it up with new ways to distract yourself, then read on. Amid all the other year-end retrospectives, future predictions, and service-y listicles pumped out by every media outlet on the planet at this time of year, this story might be for you.

There are literally millions of apps. Apple’s iOS and Google’s Android each offer more than 2 million apps in their respective download stores. Each app store has its own top charts and recommendations, where you’ll find the usual suspects—Facebook, Netflix, Spotify, Snapchat, YouTube, and other well-known social networks, media services, transportation tools, and games. But there are plenty of other excellent apps out there, from the obscure to the hard-to-pronounce, whose names might not be on the tip of your tongue when you fire up your new gadget.

Last year, we published a list of seven lesser-known, but very worthwhile apps. We suggested (and still highly recommend) Dark Sky for weather, Stitcher for podcasts, Giphy Cam for making fun animations, and Afterlight for photo editing, among others. The traffic on that post was totally bonkers, suggesting that guides like this one are exactly the type of thing you’re looking for right now. So here’s another one. This time, we’ve rounded up eight more especially useful, fun, or otherwise download-worthy apps that we’ve come across this year.

In the smartphone era, just about every moment of our lives has been thoroughly documented, but most of the images we share slide invisibly into the past under a deluge of new posts on Instagram or Facebook. Or in the case of Snapchat, they literally disappear forever. 1 Second Everyday approaches things differently. The app is designed to do exactly what its name suggests: Capture one second of video every day—or as many days as you happen to remember to use it. The end result is a rapid-fire burst of brief moments that, as they add up, offer a high-level, but insightful glimpse of what your day-to-day life looks like. It may be light on context, but the series of clips tells a story that’s otherwise hard to capture in meticulously filtered and deliberately curated photos and videos posted elsewhere one at a time—and then immediately forgotten.

With 1 Second Everyday, you can export the composite video and share it on your social networks of choice or just keep it to yourself as a sort of personal video diary. If nothing else, it’s a useful internal reminder that a given year is more than the major life milestones, vacation pics, and cringeworthy news headlines that may come most readily to mind; Life is actually composed of many many types of moments; It’s just a question of which ones we capture and remember. Download 1 Second Everyday here.

The last time I wanted to flee the East Coast for the warmth of California, I used an app called Hopper to help me figure out the best time to fly. Within minutes, my flight was booked. While there are countless flight-watching and travel apps out there, few offer a combination of simplicity and data-powered predictive prowess quite this effective. The color-coded calendar layout of its search results give you a clear, at-a-glance view of what days, weeks, and months are the cheapest time to fly. If a given flight is statistically likely to get cheaper (or more expensive) in the future, Hopper will tell you, spelling out the odds of various potential price fluctuations and when they’re likely to happen.

You can also keep track of searches and opt in to get notifications when deals pop up or when Hopper finds another locale you might be interested in traveling to, based on your previous searches. For instance, perhaps your search for a flight to Miami yielded pricey results, but if an insane deal on a flight to Ft. Lauderdale or Orlando pops up, you’ll get a push notification right away. So whether you’re planning business travel around specific dates or just trying to scratch that wanderlust itch on a whim, Hopper is one of the easiest ways to plot the most ideal possible trip. Download Hopper here.

The podcasting renaissance is still barreling forward, but it has a long way to go: Only 20% of Americans say they have listened to a podcast. 60db hopes to make digital audio consumption feel more like radio (a century-old medium that’s still going strong) but also inject it with the more personalized, digestible flavor of modern digital media services. The result, notably built by veterans of NPR and Netflix, is something that feels like radio, but with sort of the algorithmic smarts and new content initiatives that have changed the way we now define and consume «TV.»

60db allows you to subscribe to most of the standard, publicly available podcasts you can think of, but its primary focus is on shorter-form audio stories that cater to more specific interests than a general interest podcast can. These «quick hits,» often produced by 60db’s staff in concert with established media brands, offer 10 minutes or less of audio storytelling about an ever-expanding array of topics. And as we’ve come to expect from services like Pandora and Netflix, 60db learns as you listen—the more you use it, the smarter it gets. There’s an ever-growing selection of noteworthy podcasting and radio apps, like NPR One, Stitcher, and RadioPublic (another new offering from public radio vets), but 60db goes out of its way to be especially effortless and addictive. Download 60db here.

The scientific case for mindful meditation is beyond well established. And between our growing addiction to apps and screens and the anxiety of an endlessly chaotic news cycle, you could argue that our brains could use a rest now more than ever. Many experts advocate minimizing screen time altogether, but for those moments when you can’t manage to untether yourself from your phone, you might as well have digital tools to help restore your sanity. Headspace is a popular one.

The app uses a combination of cutesy design, programmable reminders, and the soothing British accent of a guy named Andy to lure you away from your mindless digital distractions and into a focused, more calming state. Headspace is (fair warning) a paid subscription service that offers guided, audio-based meditation exercises for a variety of circumstances, but it does offer enough free sessions to give you a proper feel for how the service works and whether or not it’s worth paying $13 per month (or $8 if you’re willing to pay a lump sum for a whole year of access). There are, of course, several meditation-focused apps out there, such as Meditation Studio and Sattva. If you happen to own an Apple Watch, Apple’s own Breathe app is worth checking out as well. Download Headspace here.

Even if you’re not much of a gamer, you may find it hard to stop playing this one. PinOut is an ’80s-themed retro-style pinball game for iOS and Android. Indeed, the more susceptible you are to nostalgia for the 1980s (or otherwise appreciative you may be of neon design and synth-heavy music), the longer you’ll be glued to it.

Its retro-electronic soundtrack sounds like it was ripped right from the intro to Netflix’s mega-hit Stranger Things and its pulsating, neon-laced game layout feel like Tron exploded in pinball form. Download PinOut here.

There are easily hundreds of different ways to read news on your phone—whether it’s from your friends on Twitter and Facebook or through more news-specific apps, from aggregators like Google News, Clipboard, Feedly, and Reddit to publishers like BuzzFeed, New York Times, or the BBC. But almost never do these apps break out of the traditional, headline-based paradigm of news consumption.

Quartz, the business-oriented news media brand launched by The Atlantic four years ago, had a different idea. The app it launched in early 2016 eschews the familiar format of news in favor of a conversational interface. Instead of reading news stories, you chat with them. The app’s pre-composed, often emoji-laden replies («tell me more» or «next?») allow for a name-your-adventure style of navigating the latest and most important world events. In an age of clickbait headlines and uncertainty over which news articles are even real, what could be more refreshing than talking about the news with what feels like a very well-informed friend—even if it is just a soulless bot? Download Quartz here.

If you want to keep track of our strange new reality, but aren’t in the mood to chat with a newsbot, Nuzzel is another virtual newsstand with a modern spin. The social news app shows you the articles most shared by your Twitter friends right now (by default, within the last hour—but you can filter it by 24 hours or travel back in time to previous days). What Nuzzel may lack in originality (Flipboard has offered Twitter-powered news since 2010) it makes up for with smart design and flexibility.

The app lets you step outside your Twitter bubble and see news shared by friends of friends and browse even more broadly in its Discover tab. It also helpfully suggests news stories you may have missed. Nuzzel definitely caters to news junkies first, but that doesn’t mean it doesn’t serve people prone to more casual headline scanning. In fact, it’s not even just for Twitter users anymore. Last year, the news app redesigned its service to open it up to everyone. This way, we can watch civilization unravel at the seams the way we do everything else: by silently staring into our phones together. Download Nuzzel here.

Listening to music is one of the most obvious and common uses for our phones and accordingly, apps like Pandora and Spotify always get high rankings in the app stores. But unless you’re a bona fide, crate-digging music snob, chances are you’re missing out on some of the newest and best music that’s being created. That’s because before budding artists get signed to a label or pay to self-distribute their music to major subscription services, they take matters into their own hands first on services like Bandcamp and SoundCloud. And more so than most music services, Bandcamp is able to rightfully make a rare claim: It actually helps independent and smaller label artists get paid. The service’s primary focus is on selling physical albums, downloads, and other merchandise like T-shirts. But even though it’s not a streaming service in the traditional sense, Bandcamp lets you listen to music, follow artists, and increasingly discover new music.

Simply keeping an eye on the app’s «best selling» and genre-specific tabs is guaranteed to unearth something new and delightful. By all means, check out SoundCloud and subscribe to a streaming service too—Apple Music has amazing playlists and Spotify’s data-driven music discovery features are both innovative and addictive. But don’t think for a minute that your music library collection is complete until you download the Bandcamp app. Do it.